St Martins has launched a winter campaign to push the issue of homelessness into the public eye by sharing the stories of people supported by the charity. The campaign highlights the experiences of Eddie, Sherese and James, just three of the hundreds of people St Martins has supported this year.

The poster, radio and social media campaign explains the past, present and future of each person – and the fact that their homelessness is temporary and just one aspect of their life, often a direct result of traumatic circumstances that were out of the person’s control. Each person shares how St Martins has helped them – this includes providing accommodation, support  and other opportunities such as counselling and volunteering to move on to a more independent life.

Chief Executive Dr Jan Sheldon said, “We appreciate the tremendous support and empathy local people have for those experiencing homelessness. While people often consider the physical needs of a person experiencing homelessness – hunger, cold and danger – they may not have considered the reasons that led to people becoming homeless and the emotional impact homelessness can have. This campaign shows how anybody can experience homelessness. Often the people we support have suffered significant trauma and have demonstrated incredible resilience to overcome it. St Martins are here to support people in these difficult circumstances and help them move on in their lives.”

“The bottom line is that no-one chooses to be homeless. An event such as the loss of a job, illness or death of a family member can cause immense pressure that pushes a person into a position where they can no longer cope.”

St Martins’ ethos is not to judge a person for what has happened in the past but to enable them to fulfil their potential and to support them in their recovery, which includes secure, permanent accommodation.

The charity hopes the campaign will raise awareness of their work and that people will be prompted to donate to enable them to support more people with housing, support and care. Donate online at www.stmartinshousing.org.uk

More about the campaign

In the summer of 2021 local author Jacqui Burgoyne volunteered at St Martins hostel as a ‘writer in residence’. She listened to some of the residents’ life stories and helped those who wanted to do some writing themselves. Each story was unique and showed that homelessness can be experienced by anyone. Jacqui filmed and edited the stories, with input and ideas from all participants. Jacqui said, “We talked with Sherese, Eddie and James all through this project. Sharing ideas, discussing how we wanted the films to not just be short quotes but actually to help people understand their lives, what happened, how it happened. We particularly wanted to get away from the clichéd images of unhappy people sitting in the cold on a grey pavement. Sherese, James and Eddie may have experienced something like that in the past, but that’s not who they are now. We wanted to show all the sides of who they are.”

One of the people who shared his story was James, who said, “I wanted to show people that they aren’t alone. There is a chance to have a life. It’s never finished. If little old me can do it anyone can. I’m not superman.”

If you can’t wait to watch them….you can read about them here:

Summaries of the stories covered in the campaign:

Eddie, who sells the Big Issue in Norwich, talks about being abandoned by his mother at a young age and how he and his twin brother had to fend for themselves once their grandmother had died. Sleeping in sheds and committing burglaries became a way of life, and as Eddie admits, the brothers were out of control. Eddie spent time in prison and suffered a devastating loss when his brother was brutally murdered in 2016, which led him to relapse into taking class A drugs. Now living in St Martins accommodation in Norwich, Eddie is determined to move on with his life. He expresses a desire to help others who are homeless by ensuring they have the right information about services that can help them so they don’t suffer by sleeping on the streets or turning to crime.

James grew up in a chaotic household in Norwich where neglect, violence and drug use was commonplace. At a young age he was taken away from his mum and, instead of entering the care system, his nanny and auntie took him in. James said, “As a child what do you do when you don’t have parents…do you blame yourself? Do they not love me? Am I not good enough? All I did was decide to be angry at the world and to not follow not the best paths.” At 14, James describes himself as ‘a bit of a terror’, selling drugs and drinking alcohol. Later on, James managed to settle down with a good job, holidays abroad and a girlfriend with whom he had two children. However, the relationship broke down and everything fell apart for James. He lost contact with his children and describes things getting ‘really bad’. He started drinking again, sniffing cocaine and later dealing cocaine and he became involved in heroin and crack. James was sleeping in a friend’s shed when he first spoke to the Pathways team and then moved into St Martins’ hostel. He said, “I went into Bishopbridge House with no more than the clothes on my back. That’s it. Addictions, scars, malnourished, not feeling good about myself, feeling deflated like I was a nobody.” James has received counselling, move-on accommodation and is now back in touch with his children, something that gives him immense happiness.

Having moved to Norfolk from Grenada as a child, Sherese, now 24, grew up on an army base in Dereham and describes her family as dysfunctional and abusive. Her relationship with her mother and step-father deteriorated and as a young teenager she spent more and more time away from the family home, which left her feeling adrift and lonely. She was depressed and self-harmed. With nowhere to sleep at night, she rode night buses in London and went out partying with the intent of finding some friends to crash with at the end of the night. Sherese says her options were limited and she tried for years to save a deposit to rent a house. After years of trying to save, she became desperate and got involved in the drugs trade, which ended with her getting caught and going to prison. Upon release Sherese was determined never to offend again. She was homeless when the first national lockdown happened. ‘Suddenly I mattered’, she said. Sherese was given a room and from then she has been supported by St Martins. She said, “I have the space to heal and grow thanks to St Martins.” Sherese urges people not to dismiss the effect one person can have on another said, “homelessness is something someone is going through. It’s not their ‘be all or end all’. A bit of kindness can be a massive help on their journey.” 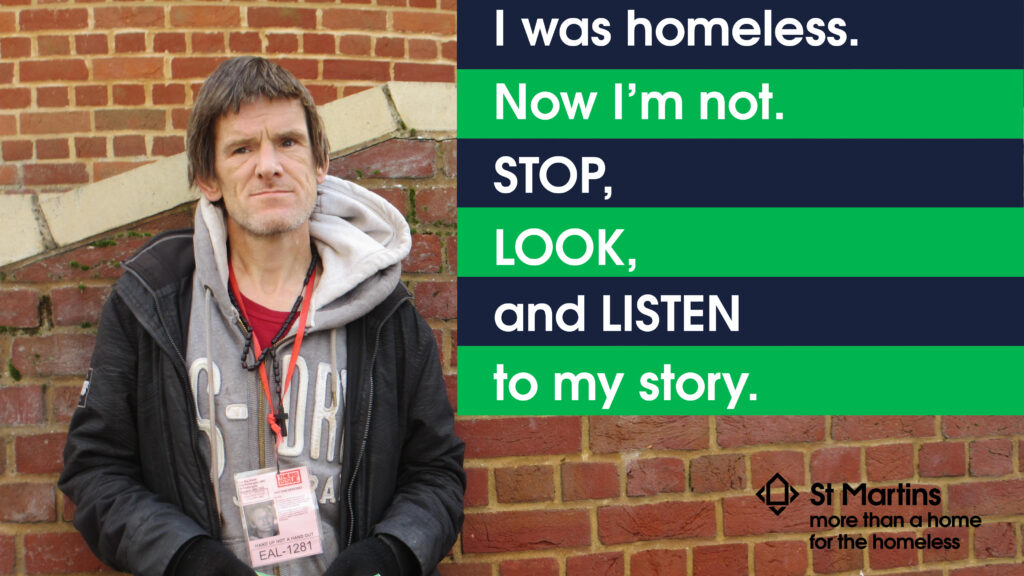