Home How we help Our impact Stories Claire’s story 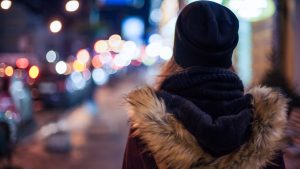 Claire remembers helping her stepdad iron his shirt for going to the pub. Her mum came down the stairs looking beautiful, ready for a night out. Claire stayed at home babysitting the younger ones.

Claire would wait up to see what mood they were in when they returned. She could tell what would happen before they even got to the door. If they were shouting she would hide on the stairs because she knew what was coming.

Screaming. The sound of her stepdad’s fist hitting her mum’s nose. He wouldn’t stop there – he would stamp on her face, kick her while she was still down and if Claire tried to help her or scream at him to stop then she would get it as well.

She blames no-one but herself for the things she’s done but has always wondered if things had been better at home would she have searched for acceptance and love in all the wrong places.

Claire met her father at the age of 15 and on their first meeting he spiked her glass of coke with amphetamine. She said, “At the time I didn’t realise there was anything wrong with this and just accepted it as normal behaviour from him due to stories I had heard about his drug use from my mum.”

Claire moved in with her father and stepmum for six months and gradually became addicted to amphetamine. She said, “It may horrify you but my dad was my dealer and would regularly just give me grams of amphet whenever I wanted it.” Claire’s relationship with her stepmum was poor and Claire was kicked out of the house, starting a cycle of homelessness for about four years, during which Claire became addicted to heroin and committed robbery to fund her habit. Claire went to prison for two and a half years. Claire hated herself. She stole from her family, who later disowned her. Claire was sent to prison and it was there that she finally got clean. She regrets everything she did that hurt people but believes that the prison sentence saved her life.

Claire is back in contact with most of her family and is slowly regaining their trust. She has been clean for over seven years and goes into Norfolk schools and colleges with St Martins Reality Check project to tell her story and speak honestly about substance abuse.

If I had known the life that drugs would lead me into I would never have started.