Home How we help Our impact Stories Sarah’s story 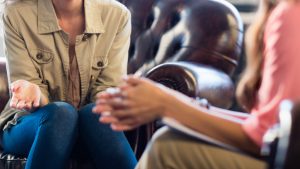 Sarah is a 44 year old woman with paranoid schizophrenia who also suffers from alcoholism. For most of her adult life Sarah had been a ‘revolving door’ mental health patient – in a cycle of increasingly poor mental health leading to her being sectioned and stabilized as an inpatient before being released back to the community for the same pattern to happen again.

Sarah had few social or living skills, was often found unconscious on the street due to alcohol consumption and was highly vulnerable – this led to her being referred to Highwater House.

Upon Sarah’s arrival staff began the process of rapport building – the focus on a social/behavioural, rather than medical, model allowed the team to build up trust with Sarah. Over time she became accepting of help with her poor physical health and began to discuss her past.

Sarah had experienced a lifetime of trauma and abuse starting from a very young age by her parents. She had never experienced a safe environment to live in and was very damaged as a person. She was fearful of most people and would spend a lot of time dwelling on past incidents.

The staff at Highwater House worked with Sarah over a period of years to make her feel safe and less fearful. Introducing CBT and mentalisation techniques as part of Sarah’s daily routines coupled with the supportive secure environment helped her to move on from her past. She began to attend classes and groups at the trusts Under-1-Roof training centre and took great pride in her achievements.

Sarah continues to live at Highwater House – she is unlikely to ever be able to live independently in the community though may cope with supported housing in the future. Her day to day life is fulfilling and she continues to work with staff to negotiate the complex emotional trauma she has experienced. After moving into Highwater House Sarah has not had to be re-admitted to the psychiatric wards.