Home How we help Our impact Stories Sasha’s story 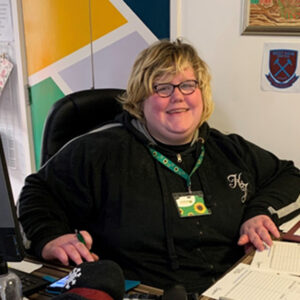 Sasha, who grew up in care, was referred to St Martins by Adult Social Services. She has depression, anxiety and suffers from PTSD. When Sasha first met her support worker Angie, she was isolated and had few friends. Sasha spent day after day at home alone – “I was isolated in my own home. Covid has not really affected me – I was used to it.”

Getting to know Angie was the first step in coaxing Sasha out of an isolated lifestyle.  Sasha said, “Angie’s great. I needed support in a lot of areas and she made me come out of my shell.”

Angie encouraged Sasha to come along to sessions at Under 1 Roof, St Martins’ learning and development centre. She started to join in with art, music and mindfulness sessions, and later some 1 to 1 counselling.

Sasha says she has “fitted in like the furniture”. She volunteers on the reception desk three days a week, which involves answering telephone enquiries, answering the door buzzer and welcoming people as they come in.

She said, “it’s funny how I became a volunteer. The phone at the reception desk rang. There was no-one there because they were busy doing something so I answered it. Then I did it again!”

“I enjoy being here. This place has helped me a lot. It has introduced me to new people and given me a reason to get up in the morning.”

The team at Under 1 Roof know Sasha well. Sasha said, “I get along with people here. Everyone is nice to me. People at St Martins are so caring. They don’t just come here because they get paid. They genuinely care about everybody here. They give so much and don’t expect nothing back.”

“They always notice if I’m down or miserable. I’ve got a lot going on with my mental health. This place has helped me. People listen and give me their advice.”

Sasha has always been good with kids and is proud that she has passed her level 1 certificate in childcare and plans to complete her level 2 qualification. The acceptance and encouragement she has experienced at St Martins has helped her flourish over the past few months.

Sasha has been supported by St Martins for a couple of years. She can recognise the change in herself – she said, “I’ve changed a whole lot” – something the Community Services team at St Martins can vouch for.

Her support worker Angie said, “We think she’s amazing. I don’t even know if she realises how far she’s come.”