Home How we help Our impact Matt’s story 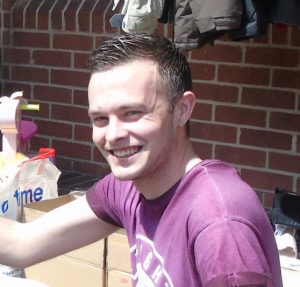 When he was 16, Matt’s mother and stepfather asked him to leave their house because he was using drugs – principally methadone. His much-loved grandfather had recently died and, in his own words, he went “completely off the rails”. To earn some money, he found a job in a fish and chip shop in Easton – which was also being used for dealing in drugs, until it was raided. With no income, he then started sofa-surfing with friends.

About a year later, Matt came into contact with the Norwich-based St Edmund’s Society, which gives vocational support to young people, and began the first of a series of attempts to turn his life around. He found a job at Tesco and was now earning reasonable money. But he started taking drugs again, this time harder ones such as cocaine and cannabis, which soon began to take their toll on his earnings.

So, to boost his income, he began to steal Xbox games from the store for selling on to friends, stowing away the identifying packaging in his work locker. Stocktaking eventually revealed the loss and lockers were searched. The police were called in, he was taken to court, fined £600 and barred from Tesco for life.

By his early 20s, he had managed to secure his first council flat, though after a while, he found himself unable to afford the rent. Having built up arrears of £1400, he resumed sofa surfing for a lengthy period.

Matt then moved in with a friend from his footballing days. He had been good at the game at school and had played for the local Sprowston side. He thinks now that he might have had the chance of a career in the game, having also played in the county team. Later, staying with yet another friend, he woke up one morning, decided that he couldn’t go on living like that any longer and moved out later the same day.

He then got in touch with Norwich City Council in his quest for help. They referred him promptly to the Pathways service. Through Pathways, he achieved the important step of having his rights to benefits clarified and established. He had a phone call from Louise, a support worker at St Martins, which helped put his life firmly back on track again. As a result, he is currently living in St Martins’ hostel on Dibden Road, He is also paying off his rent arrears and has been reunited with his mother.

Matt volunteers for St Martins at the Donation Station where he helps sort donations from the public and distributes them to people in need. Matt wants to get back to paid work and to have his own council flat again. In time, he would like to become a full-time support worker for St Martins.