Home How we help Our impact Stories Colin’s story

Colin came to St Martins as a 40-year-old struggling with debt to the local council and dealers; he was in a vulnerable position and about to lose his tenancy and faced violent retribution for the money he owed on the streets. His drug use had risen sharply and he was displaying symptoms of schizophrenia – talking to his voices, hitting himself in the face- despite claiming he was ok.

Colin accepted the placement at Highwater House, one of St Martins’ services but did not engage with the staff. He spent a lot of time out of the home having found a new supplier of heroin and Spice, and the times he was in the home were largely spent in drug-induced unconsciousness. 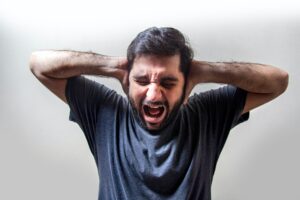 Staff tried to find ways to connect with Colin but to little avail – he refused one-to-one support and didn’t enjoy being around other people. He didn’t like to show ‘weakness’ in the face of his illness and attempted to control his symptoms by isolating himself and heavy drug use.

After a month of little meaningful engagement Colin began to come in to the staff office late at night sometimes for some biscuits and, over time, a chat with one of the night staff. This became a habit – he obviously felt comfortable being up at night and with fewer people around.

This regular chat with the night staff gave Colin confidence in the home and proved staff to be non-judgemental in their support of him. The unconditional positive regard shown to him reduced the sense of persecution and labelling he clearly felt and hated. The night staff fed back to the day team about his wellbeing and mental state.

Over time Colin began to access day staff as well, tentatively building the first steps of a relationship with them. With the acceptance he felt, his drug use reduced slightly, giving the staff a chance to better assess and support his mental health needs and to build connections.

One day, Colin sat down and asked to speak to a mental health professional with a staff member present. In the meeting he discussed openly and thoroughly the difficulties he was having with his voices and how he’d like to change his anti-psychotic medication, which was agreed. He also accessed the drug and alcohol service and became stable on a buprenorphine script.

The building of rapport with Colin by the night staff led to him accessing services he hadn’t used for years and contributed to him leading a much more stable, well and fulfilling existence. The 24-hour staffing of the home provided and ‘always on’ approach to creating points of connection with such a chaotic individual with very positive results.

Photo by Usman Yousaf on Unsplash