Home How we help Our impact Stories Geoff’s story

Geoff, who is in his sixties, has been known to St Martins for at least 20 years. Very well-known amongst support services, charities and grassroots groups in Norwich, Geoff could be described as an ‘entrenched’ homeless person.

Over the years, Geoff circulated from the streets to hostels to prison, then back to the str 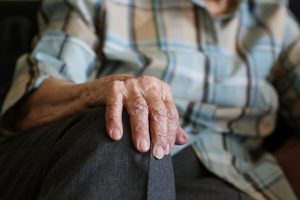 eets and it was a repeating cycle than seemed impossible to break. On three occasions Geoff had been given a tenancy on a flat but was unable to sustain it due to prison sentences and getting into rent arrears and he returned to sleeping on the streets.

People who sleep rough long term can be very difficult to support because they often will decline help from services. There may be a feeling of mistrust, having been let down in the past or if something has not worked out and they are not willing to try again.

It was a challenge to encourage Geoff to accept support. He has always been a heavy drinker, which made is his lifestyle incredibly chaotic and his behaviour was unpredictable. It seemed that Geoff had exhausted all of his options and he was declining both physically and mentally from years of alcohol abuse and rough sleeping. He seemed to be very disillusioned and appeared to have given up on himself.

A breakthrough came with the cold weather – although Geoff refused assistance from our support workers in recent times, over the years we built up a rapport with him and he would talk to the Pathways team. With funding from Norfolk Community Foundation’s Surviving Winter campaign, the team were able to offer Geoff a few nights’ stay in B&B accommodation. Usually wary of support, Geoff accepted the offer and it is no exaggeration to say that it has changed his life – possibly even saved his life.

The B&B accommodation gave Geoff the stability he needed to fully engage with our services. Remarkably, for the first time in years he has successfully detoxed from alcohol. He looks better and most importantly feels better and has an appetite for life which he had lost while he was on the streets. He is currently waiting for a place in St Martins’ dry house where he will be given daily support by specialist workers to help him to abstain from drinking and build up his confidence so he can live the life he wants to live. Geoff, quite rightly, feels proud of himself. His story shows that it is important to never give up on anyone; it is never too late for a person to accept support – sometimes it just needs to be the right support at the right time.