Home How we help Our impact Stories Jo’s story

Jo, whose uncle Graham is a resident at Webster Court writes about Graham’s experience as he moved in to the setting 18 months ago. Jo is the closest relative to Graham and her account highlights the importance of involving family members in the care offered at Webster Court.

My Uncle Graham, a gentleman with chronic severe mental illness together with the physical frailty of old age, has been in hospitals for much of the past 30 years of his life after a brain haemorrhage left him with bipolar affective disorder. Before moving to Webster Court he was resident in an acute psychiatric ward for over 5 years, mainly because of failed discharges and the lack of a suitable placement being found. 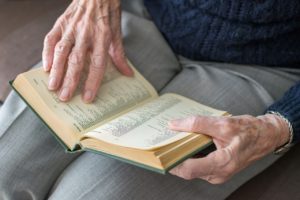 When he moved to Webster Court both his family and my uncle himself were uncertain. However, from the moment that I met Joy the manager at Webster Court, I felt a sense of hope that things would work out. The person-centred approach, dignity and respect that was shown to Graham during those initial meetings was key to the success we now see. Indeed the initial meetings at Webster court were far more positive than previous failed placements at other providers.

During the initial settling-in period there were challenges that involved the personal safety of Graham and some safeguarding concerns when he wandered out alone (a risk because of his frailty and unsteadiness). This was managed in not only a dignified manner but also with excellent communication to myself about any situations, concerns and plans moving forward. Staff were very supportive of Graham at this time, because they knew he was finding his feet in a new setting with more freedoms than he was used to.

Ongoing, the care and support that myself and Graham has received has been second to none. There are always plenty of staff available at Webster Court and they keep me appropriately informed about concerns / events. My Uncle’s independence is maintained appropriately and

managed well depending on his fluctuating physical and mental wellbeing, something that we believe is vitally important to a gentleman that was a very successful businessman in the past. I feel that the staff treat him with respect, supporting his choices as far as possible and engaging in discussions about these choices when it is felt it would help him.

The environment at Webster Court seems to be very appropriate and when visiting Graham there are often small social groups of adults watching TV, talking or tending to the courtyard garden. It always comes across as calm and respectful of everyone. Other residents are often chatting with my Uncle when we come to pick him up to go out and I know that this is something he enjoys, even though he would never admit to it!

I think the staff do a wonderful job in what must be a very challenging environment.