Home How we help Our impact Stories Kareem’s story 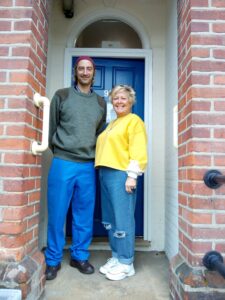 Kareem, with the keys to his new flat in his hand, is ready to leave St. Martins, describing the moving out process as “like a whirlwind”. His support worker Kim is positive about his future “It’s not an easy ride for anyone. If there should be a blip in the future, Kareem has the tools to deal with it”.

Yet eight months ago, neither had been involved in St. Martins. Kareem moved to St Martins Magdalen Road project in February and Kim joined just two weeks into lockdown, having previously been a probation officer in London for 20 years.

Kareem has suffered from poor mental health since he was 18 and had found himself sleeping rough; opening up the warehouse where he worked managing a team at 5 am, and washing there. “All that can be lost overnight” he reflects. During this time, he was also battling a Class A drug addiction and he had started to borrow money for heroin, and in doing so, lost his authority leading him to resign.

Despite being written off by so many people, Kareem never wrote himself off, instead turning to St. Martins. ”Taking that first step is a very difficult thing to do. It is very easy to get put off” adding, “St. Martins is my safety net”.

Upon arriving at St. Martins, Kareem once again struggled with his mental health. “I used to hole up in my room. I stayed in my bedroom and didn’t interact with anyone” but by starting to work with other residents in the house to clear the garden, Kareem began to take pride in his environment, the first step towards helping himself.

Initially, Kim knew Kareem as bright, bubbly and outgoing and encouraged all the residents to contribute to the house and the running of the project. However, soon she noticed a sharp decline in his mental health and raised concerns with the mental health team. It transpired he had stopped taking his medication.

“I was not taking care of my appearance. All the signs were there that I was on the wrong trajectory”  turning to Kim “I am so grateful that you noticed”.

Kareem was sectioned for five weeks in a hospital in Kings Lynn, keen upon his return to St. Martins to keep on a positive path. Kareem started doing more around the house and took part in the shared activities, including shopping for the summer BBQ, quiz days and cooking with donated food from The Pantry.

With Kim’s help, Kareem drew up a recovery plan- including all skills that would serve him well for when he moved into his own accommodation. “The goal of being here is not to be here” Kareem says, having always seen Magdalen Road as a stepping stone. When they both felt Kareem was ready, Kim started helping him move on, both practically and mentally. Kareem remains grateful for the financial assistance he has received- a grant from the Norwich Assistance Scheme and a £125 decorating grant from the council to spend at B&Q.

Reflecting on the past eight months, Kareem recognises how important Kim has been to his successful time with St. Martins “The time, effort and energy you have invested in me has brought about the positive results of recovery.”

For Kareem, it has not just been about helping himself. During his time with St. Martins, Kareem has been training to be a peer mentor with Together (NICHHS Team). “I would like to give back”, and he will be. From the end of October, Kareem will be supporting others who have found themselves in a similar situation to him on their path to recovery.