Home How we help Our impact Stories Steve’s story 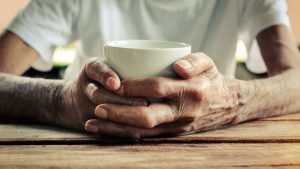 Steve had lost his tenancy in the community due to excessive noise and neighbour complaints, and had become homeless. He had a history of violent criminal offending and had spent many years revolving between prison, failed tenancies and psychiatric wards. Steve had a diagnosis of paranoid schizophrenia and a history of self-harm and suicide attempts through overdose. He was drinking heavily and chaotically and was using street drugs.

Due to the high risk he posed, Steve would not be accepted in other residential settings apart from Highwater House, run by St Martins.

Over several months, our staff befriended Steve and gained some trust as well as some insight into his past.

Initially, Steve was very aggressive and volatile. It became clear that his extreme levels of aggression and heavy drinking were coping strategies from his time on the streets.

Over several months, our staff befriended Steve and gained some trust as well as some insight into his past. With strong boundaries and a consistent approach he became settled at Highwater House and his physical and mental health became increasingly stable.

Steve became more trusting and open and, with the support of staff, was able to move on after three years and has been able to cope with independent living.