Villagers from Old Buckenham have raised over £39,000 for Norfolk homelessness charity St Martins in the last year.

The money was raised over the past twelve months mainly from collecting outside major supermarkets, an effort co-ordinated by Old Buckenham resident Michael Bartlett, who has been a committed supporter of St Martins for many years. A further donation was made by Old Buckenham 2000 Trust and from the Christmas Eve service at All Saints Church. 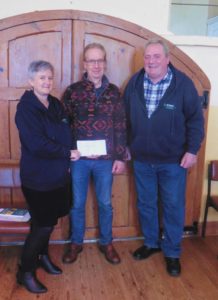 The money was handed over to the charity’s Chief Executive Dr Jan Sheldon and Manager of Dibden Road hostel Jim Curtis on Saturday February 1 at the Church Rooms in the village. Jan said, “We are grateful to the volunteers who have devoted their time to collect for St Martins and to the public who supported this appeal. This donation makes a real difference to us. It means that we can accommodate more people who otherwise would be sleeping rough on the streets.”

Jan thanked all those present for all their hard work throughout the last twelve months and gave a short talk on all that has gone on during the last year to support homeless people and ensuring that they have the opportunity to improve their lives. She also answered questions from the volunteers.

Pictured above: Several of the volunteers gathered outside the Church Rooms in Old Buckenham