Home News All hands to the mop 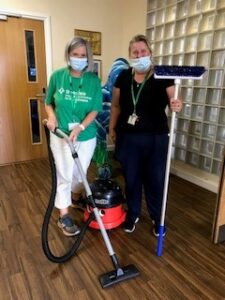 St Martins CEO Jan stepped away from her office for the day and brandished a mop and bucket as she worked a shift alongside our domestic workers.

Jan reports how it went:

Part of our commitment as a leadership team for 2021/22 is to do more front line shifts. The reason for this is to ensure the senior management and the leadership team never lose touch with what is happening on the front line and that all decisions taken are informed by all relevant information.

Having spent all of my career in social care, going back to the front line is a pleasure. The people we support at St Martins are all very unique individuals; all of their stories are different. Some harrowing and some a catalogue of bad luck and sometimes poor choices (but show me one person who has never made a poor choice).

So when it came to considering which poor, unlucky service would have me as a front line worker for the day I thought I should push outside my comfort zone. At St Martins we have 180 team members doing a wide variety of roles; these roles include support roles as well as front line workers. Whilst all team members are valued for their work sometimes some teams feel that little is understood about their work. So, with this in mind I decided to join the domestic team at Highwater House, our Care Quality Commission (CQC) registered care service. I did give some thought to joining the Maintenance Team but felt I could be more of a hindrance than a help and my painting skills wouldn’t pass muster.

It was early July when I spoke to Karen, one of our dedicated and committed team of domestic workers about joining her for a shift. There was a glint in her eye when she said…….’so I get to boss the boss?’ ‘Yes’ I reply, wondering what I had let myself in for. A date was set and further instructions on what to wear were issued.

So at 7.15am on Tuesday August 3rd I reported in for my shift. Like most office workers I’m used to a coffee while I check my emails and a gradual start to my day. I soon discovered life with Karen is a bit different and I was allocated my first task which was sweeping the stairs and corridors. All was going well until I stepped on my dustpan and scattered the contents everywhere. Karen came to check on me (several times) and I got the feeling that she would have done it in a quarter of the time.

Several other tasks were allocated and we also ventured into a couple of residents rooms to assist them. Some of the people living at Highwater House take great pride in their environment; others have other priorities. James* was keen to wash the floor and supervise our progress. I think he was quietly impressed with my efforts especially with his bathroom sink. Both Karen and I were careful not to move things around too much or throw away what could be viewed by some as rubbish. When someone has so little what they have is so much more important to them.

Talking to Karen later she reminded me how you have to find the best way to work with someone and everyone needs a different approach. Sometimes people are too poorly or having such a bad day that to clean around them wouldn’t be a kind thing to do. It’s also important to recognise what vital members of the support team the domestic workers, chefs and maintenance workers are. Not only do they provide an important service, they are also people the residents know and feel comfortable with. Sometimes they are the first to hear important information or worries and concerns.

So, how did I do? Well, I must confess to being someone much happier at my desk than engaging in hard physical work. However, Karen says I did OK – ‘a good eye for detail and not afraid of hard work’. However, I think I’ll leave cleaning to the experts now…!

*not his real name