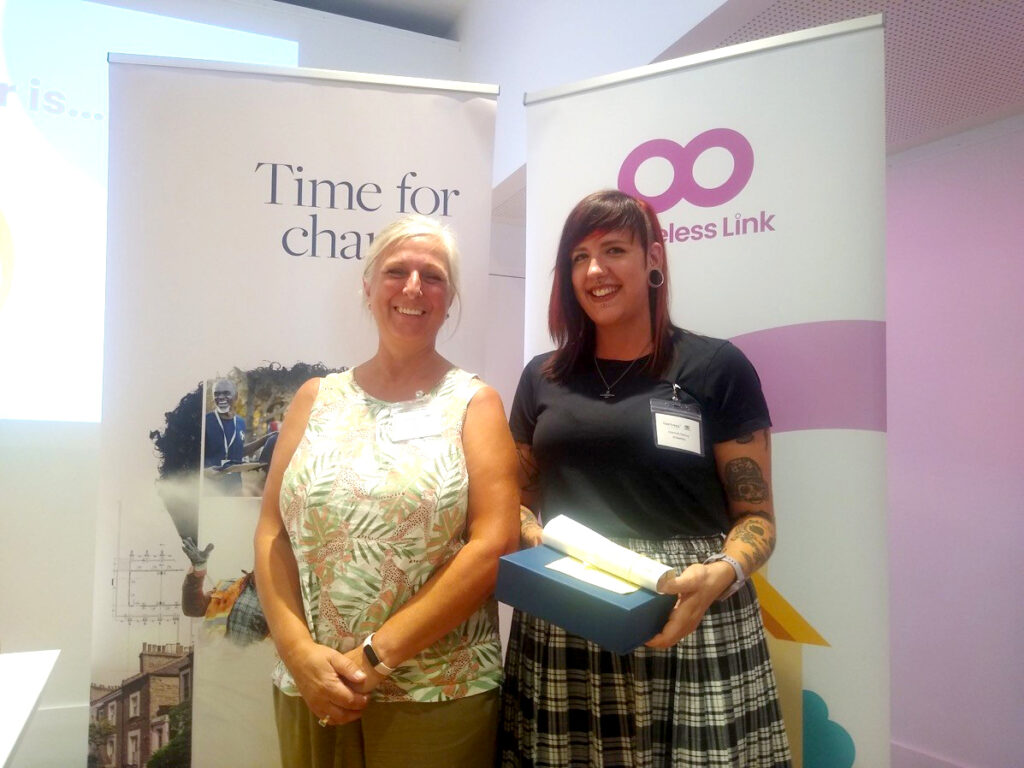 Rebuild is a project that prevents people from ending up on the streets after being released from prison and won the ‘Prevention into Action’ category in Homeless Link’s annual Excellence Awards. Homeless Link is the national membership charity for frontline homelessness organisations. St Martins’ Rebuild Project works with people assessed as being at high-risk of reoffending. It supports people that are excluded from other services due to their level of risk and works with them at this crucial time to support them to reintegrate into the community, address offending behaviours and find suitable accommodation. Without the Rebuild project, the most critical people being released from prison would end up homeless, and would not be given an opportunity to improve their lives and break out of the offending cycle.

The project has two properties in Norwich for people with no other accommodation options upon release, and also provides outreach support in the community to those in temporary accommodation.

The project works alongside social services, mental health services, the police, probation, drug and alcohol services and education agencies to give its clients the best opportunity of developing a new and better life for themselves and sustain a lifestyle where they don’t return to the cycle of offending, losing their accommodation and then being released from prison again with nowhere to go.

Rebuild is getting national recognition for its life changing work with some of the most marginalised people that have been through the criminal justice system. Director of Homeless Services Maria Pratt accepted the award alongside Rebuild Co-ordinator Hannah Molloy. Maria said, “This is a pioneering project and we are proud to have launched it in Norfolk and to have a national platform to share our work. One of our values at St Martins is to be progressive and respond to the needs we see in our local community. This flexible approach along with Hannah’s excellent co-ordination of the project has seen a 57% reduction in reoffending and many stories of lives improved.”

Rebuild is funded by Norfolk MAPPA. Co-ordinator Stephen Tunks said, “Before Rebuild high risk offenders were impossible to accommodate. Now there is a place for them. This initiative is ground-breaking in its inception. It is imaginative and innovative, clever and different. It is testimony to and as a result of those who have the passion expertise and knowledge of dealing with such difficult hard to place individuals that it has been so successful.”

Once case in particular involved a person that had been in prison for so long that he said it felt like his ‘safe place’. When this person started working with the project, he was accommodated within an approved probation hostel with no options for his discharge and was due to be homeless at the end of his stay. He was so frightened by the thought of being unsafe on the streets that he had planned to commit another offence to get back to a place where he felt that he didn’t need to feel scared. After working with Rebuild to address his situation, the client was offered accommodation within a setting where he would usually have been excluded and he was only offered this placement because of the ground-breaking support that Rebuild had provided. Despite concerns over the longevity of this placement due to the individual’s history, because he had given the support and opportunity he needed to turn his life around in a stable and safe setting, he excelled. The client continued to engage with Rebuild to further address his situation and after settling into his accommodation he said to his support worker that this is the first time since being released that I have not wanted to go back to prison.