Norwich resident Stephen Musk has published a book documenting a life of mental illness. Green Icing details his experiences of isolation, anxiety and paranoia. It also contains reflections on friendships and human interaction, which remained elusive for much of Stephen’s life. He describes spells in psychiatric hospitals, including Hellesdon Hospital in Norwich, some of which he recalls with fondness for the security he felt. A first class graduate from Cambridge, Stephen achieved a doctorate and an illustrious career as a scientist. He is a member of Bridges, a peer support group for people with enduring mental illness run by St Martins. 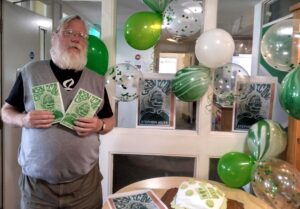 Green Icing is named after a song lyric from Richard Harris’ MacArthur Park, a metaphor for loneliness and shattered dreams, including a cake left out in the rain with its green icing flowing down— an image that people find either hilarious or bewildering. This provides a fitting context for Stephen’s story, which is candid, funny at times, and provides an insight into the pain of mental illness.

Stephen said, “I have never hidden the fact that I have poor mental health. I’m always happy to share.”

Stephen participated in ‘true stories live’, an initiative at Norwich Arts Centre on Sunday nights when tell their stories for 5 – 10 minutes. Initially a terrifying experience, Stephen began to enjoy it and feedback from the audience was that it would look good as a book.

Writing has proved to be cathartic for Stephen, who found it a useful way to process what had happened in the past.

Stephen’s first time in hospital was in 1986 while he was at university. He was still ‘presenting well’ inside his college and managed to keep his true mental state a secret.

He was born and brought up in Caister St Edmund and lived in Norwich most of his life. He started attending Bridges, which is mentioned frequently in the book, in 1996 shortly after it was founded. He said, “Bridges helps people get less ill, less quickly. For me it is an ideal mechanism for staying out of hospital.” For Stephen, recovery from mental illness is not a focus, but rather he aims to maintain stability.

Stephen also used the ‘Under 1’s Wing’ service run by St Martins for people in crisis. He said, “It was brilliant w 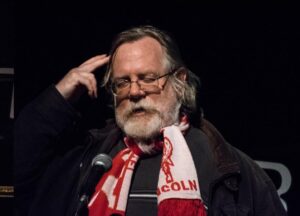 hen I was going through a bad patch.”

Stephen believes that feelings are now talked about more readily and he hopes his book might be used as a teaching aid for social work students.

In the week up to World Mental Health Day on October 10, St Martins is sharing excerpts from Green Icing to encourage understanding and discussion over some of the topics raised in the book.

Green icing can be purchased online at www.stmartinshousing.org.uk/shop