Home News Creativity has the power to unite people around homelessness 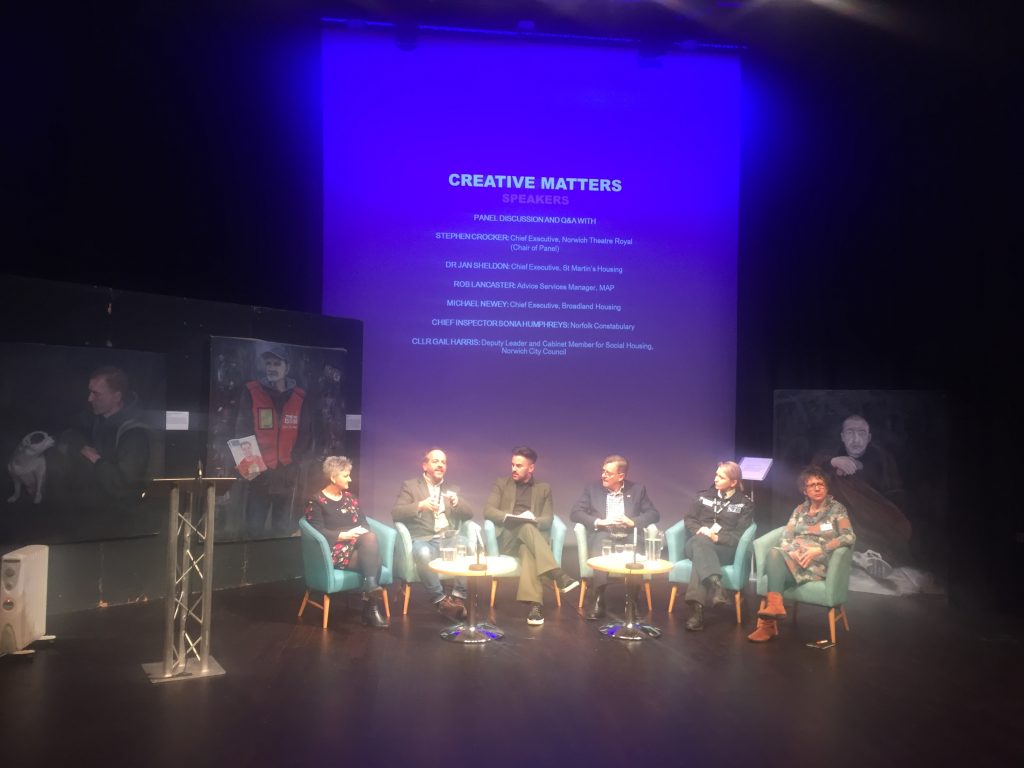 Understanding, hope, creativity and partnership between charities and organisations were the subject of discussion at Norwich Theatre Royal’s month-long focus on living with homelessness in the city.

Speaking to panellists representing Norwich City Council, charity MAP, Broadland Housing and Norfolk Constabulary, Dr Sheldon spoke about homelessness being an indicator that something had gone seriously wrong for an individual and that partnerships were key to providing solutions.

Pathways is a project led by St Martins that combines the experience of qualified specialists in areas from welfare and housing to health services from seven local organisations to deliver help across different hubs in the city. Dr Sheldon said, “No one organisation has all the experts. Pathways is made up of partners working together.’’

Dr Sheldon explained how St Martins started off in the 1970s focusing on providing accommodation for people but has developed its services to deal with a problem more complex than simply providing a home.

‘’Now, we have an outreach team and various accommodation projects; we recognise that people need more than just a home. We do a lot of preventative work and learning and development with people.’’

Cllr Gail Harris, deputy leader and cabinet member for social housing for Norwich City Council, told an audience of representatives from various organisations, volunteers and members of the public, that organisations cannot ‘work in isolation’ as they do not have the capacity or the money.

The event, which took place at the theatre’s Stage Two venue, showcased two Creative Matters projects. Researchers and directors Darren France and Laila Choat [pictured below] have produced a verbatim play commissioned by the theatre, and based on the words and stories of people experiencing homelessness, called Street Life. Devin Smith, who is a visual artist for the Art as Intervention exhibition also spoke about her work to connect people with those who are homeless. 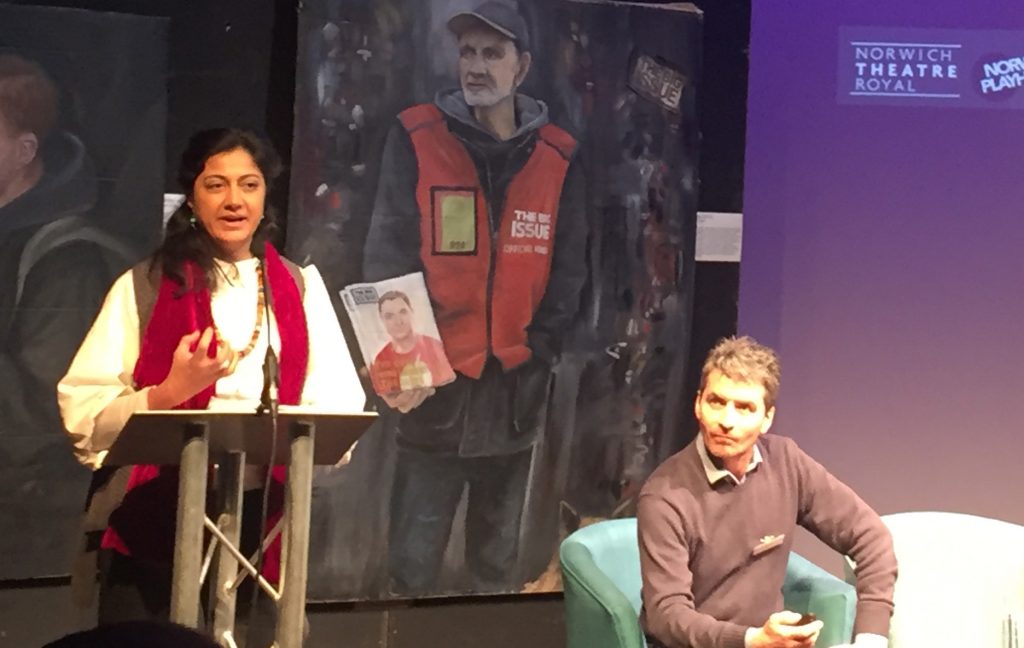 Mr Crocker said the programme aims to show situations of frustration to stories of hope, resilience and determination which this month will ‘shine a light on’.

The play explores themes around relationship breakdown, mental health, domestic abuse and alcohol. Mr France, who has a background in theatre and youth and community work, working in mental health for 22 years, said people shared stories with them and talked about challenge and tragedy and the complete loss of hope at various points in their journeys but often regaining hope.

Ms Choat, who has a background in theatre, ran a youth theatre but also worked in social health and care through a hospital setting, added: ‘’It’s a verbatim play and you can really feel the impact of that.’’

She spoke about how people, who are homeless, whether on the street or sofa surfing without a permanent home, can feel invisible. “People felt like they were invisible and not seen. Just a smile or hello can make a difference.’’

Artist Ms Smith spoke about building a rapport with individuals and spending time learning and documenting their lives. Using portraiture, she looks to portray the human being people can empathise with. Many of the paintings were displayed on the streets of Norwich alongside the individuals who appear in them. One of her portraits features homeless man, Sergiusz Meges, who she had photographed sleeping near one of her paintings. In a sad twist, sometime after he died inexplicably on the city’s streets, highlighting just how difficult life can be.

Michael Newey, chief executive of Broadland Housing, says it is difficult to change attitudes about homelessness but art has a key role in engaging people in different way.

‘’Too often people walk past people on the street and do not think about the consequences of that abandonment.’’

Universal credit was also mentioned as creating a difficult environment for people with Cllr Harris stating that even if people do get a flat, without support it can be incredibly difficult and very isolating.

Mr Newey added that the lack of social housing had also been a factor in exacerbating issues: “Since Right to Buy we have 2 million homes less than we had in 1979 in the social sector.’’

St Martins is working on providing more accommodation, Dr Sheldon explained:  “We are planning for the next three years to work on a new accommodation project to take people off the streets. It doesn’t particularly sit right that charities are having to plug the gap but that is where we are.’’

While Chief Inspector Sonia Humphreys told panellists:  “It doesn’t matter how much housing is out there unless you look at where the problem is coming from; it’s addiction, domestic violence, you have to look at prevention work, young people need to understand about healthy relationships… until someone belongs, there is no self worth there.’’

Family breakdown, overcrowding and financial problems are a big cause of homelessness for young people. Around 19 per cent of children say food is becoming an issue and while the number of people in work is rising, the number of people in work and in poverty is rising too, said Rob Lancaster, advice services manager from MAP. He spoke about helping people before they become long-term homelessness and how hope can disappear further down the line and addiction is then more likely to apply.

But many of the contributors talked about the positives of projects like Creative Matters to ensure a connection and understanding of the human beings behind the people who are homeless on the streets. Mr Crocker told the audience that there are divisions in society but that ‘creativity had the power to unite people’.