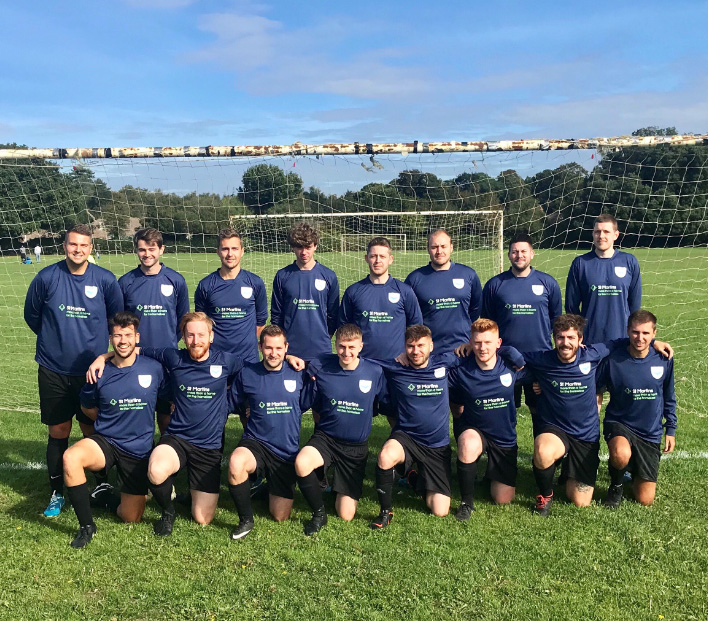 St Martins enjoyed a field day at the Norfolk Christian Football League’s 2019 end-of-season mini-tournament in April when grassroots team the Eaton Eagles stepped up to receive the league’s fellowship trophy – their strip proudly bearing the charity’s logo. The award is based on marks for sportsmanship given by participating teams to their opponents.

The Eagles, whose players come from the group ministry of St Andrews and Christchurch in Eaton, are sponsored by long-term church member David Taylor, who chose to put the St Martins logo on the strip. The churches have previously had youth teams in the League, but this was their first appearance as an adult team.

In the trophy rankings, the Eagles were level on points with 2018 trophy winners Silver Road Baptist, but took the award because they had been given fewer yellow cards during the season. They received only one, against Silver Road’s three, and neither team had any red cards.

The presentation came at the end of a four-team tournament, which was won by Stalham Baptist in a dramatic penalty shoot-out against the Eagles. Their manager Henry Aspin, said: “Winning the fellowship trophy is a fantastic achievement in our first season together. We are very proud of it and are already looking forward to the next season”.

Grassroots football teams are always looking for local businesses as sponsors to pay for their kit and equipment, which normally features a company’s logo to gain it publicity. Mr Taylor said: “I am a huge admirer of the work St Martins does among the disadvantaged and the dispossessed”.

St Martins CEO Dr Jan Sheldon added: “We’re very pleased and proud that our logo has been given prominence every Saturday morning on the football field. There are lots of ways to support St Martins, and this is a really innovative idea.”

In the 2018-19 season, the League fielded 36 teams spread over five youth and adult divisions. It is currently looking for more in the Under 10s and Under 16s age groups.

League chair Jim Green commented: “The four-team tournament, which was won by Stalham Baptist in a dramatic penalty shoot-out against the Eagles, was a wonderful way to celebrate the season, which had so many good, competitive, sporting games and showed friendship growing between and across teams”.

Article by David Crawford, who volunteers for St Martins