Home News ‘I do it to make a difference’ 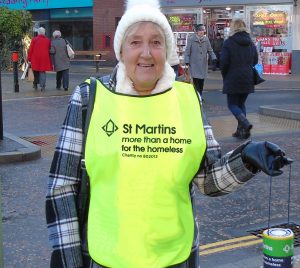 The annual street collection for St Martins is underway, with a team of volunteers collecting in Norwich city centre every weekday and on Saturdays until December 23.

Richard has been collecting for the charity for 27 years. His favoured spot is outside Boots on London Street. He remembers the very start of provision for rough sleepers in Norwich when the Dean, Alan Webster, set up the Norwich Night Shelter Project at St James’ church on Barrack Street.

Shoppers recognise Richard from week to week and even from year to year. Richard said, “Some people know I’ll be here and seek me out to give a donation. They know that St Martins is a local charity and they want to do something to help the people they see on cardboard in the doorways.”

Many of the collectors are connected with Norwich churches – and others who feel moved to take action for homeless people in the city have joined in over the years.

A new collector this year is Karen, who decided to give a couple of hours of her time. She said, “I’m cold! I’m beginning to lose the feeling in my fingertips – but it doesn’t compare to what it must be like to sleep on the streets.” 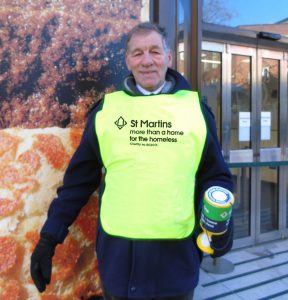 Another collector who was stationed on the corner of St Stephen’s Street described an elderly lady who put £75 in the collection tin. She said she had a nice warm house to go to and could only imagine what it would be like for people who have nowhere to call home.

A teenager walking along with a group of friends broke away to put a pound in the tin.

Whether it’s a large donation or some loose change, all the money raised this winter will go to provide extra facilities for rough sleepers at the hostel Bishopbridge House.

Each day a couple of people volunteer to count the money in Barclays Bank on Red Lion Street so all the donations are banked on the same day.

The people of Norwich care about the homelessness they see around them and it is possible for everyone to make a difference – whether they give their time to collect or put some cash in the tins.

One volunteer, Brian, said, “I do it to make a difference, however small. It’s a way to give something to our community.”

To assist with the collection, please contact Gill Williams at gillianswilliams@aol.com or (01603) 438766.