The Pathways service for rough sleepers and people with complex needs was formally launched in July 2018.

In the last three months there have been 122 positive outcomes. The Pathways team has been working hard to build up a rapport with people sleeping rough in Norwich so they can find out what their needs are and offer solutions.

The team conduct a street count several times a week to identify who is bedded down and to respond to reports of people sleeping rough, this may also include people sleeping in vehicles or tents outside of the city centre.

The team deliver a daily outreach service to offer support to people who are engaged in street activities, primarily street begging. They offer advice and support, which is accepted by some and rejected by others. Pathways workers persistently and consistently offer support to people and their visible presence on the streets has built up recognition. 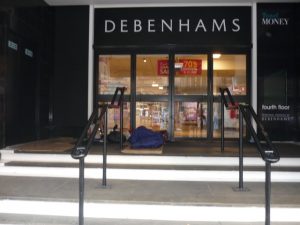 14 of the people found sleeping rough already had suitable accommodation but remained rough sleeping primarily due to entrenched behaviours around drug and alcohol issues.

Mental health and substance misuse are issues for many of the people assessed by the team and indicate the complex nature of the support needs for people presenting to the Pathways Norwich Team.

The majority of people (66%) had a local connection to Norwich (15% were from elsewhere in Norfolk).  Prison release with no accommodation and relationship breakdown remain significantly high reasons for homelessness.

18% of rough sleepers the team engaged with were female. The team encountered a broad age range; 1 person was under 18 and 3 were aged 61 or over.

Dr Jan Sheldon, CEO of St Martins and spokesperson for Pathways said, “The service is still in its early stages but there are already many examples of how the multi-agency approach is working. Pathways is not simply about getting people off the streets but about offering ongoing support so they have the best chance of a positive outcome.”

Some of the people who have been supported by Pathways

*Matt, 27 had a chaotic and disorganised lifestyle and was at risk of re-offending and of overdosing. The Pathways outreach team came across Matt during their early morning street count and returned later on to find out more about him and his situation. He was housed at Bishopbridge House and, through an enormous personal effort and through the support of (Change, Grow, Live) CGL, he has managed to come off the drugs and stop drinking.

To ensure Matt has the best chance of recovery, it was crucial for him to move to an environment that was completely free of people using these substances so he moved into the Dry House which is one of the accommodation options offered by Pathways.

Matt has more money in his pocket now that he has stopped using drugs and has started to look after himself and take care of his appearance. His long term ambition is to live independently and to rent his own flat.  Short term, he aims to remain drug and alcohol free, and with support from the Pathways team he has an excellent chance of achieving this.

*Ben, 24, had been sleeping rough in Norwich city centre. His situation was so severe that he was admitted to A&E and successfully completed an in-patient detoxification from drugs and alcohol at the Norfolk and Norwich hospital. It was important to ensure that he didn’t relapse upon discharge so the Dry House was an ideal place for him to be housed.

Ben’s situation has dramatically changed since he has used the Pathways service. He received medical care from City Reach and has a CGL support worker to assist with his drug addiction. He uses the computers at Under 1 Roof and has access to training and development courses there. He has also started playing football, and as his fitness has improved, it has had a huge impact on his self-esteem.

*Not their real names