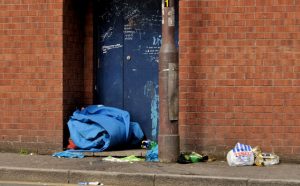 Official figures on the levels of rough sleeping across England were released yesterday (January 25, 2018). According to the latest figures, collected in the Autumn of 2017, 4,751 people are estimated to be sleeping rough on any one night.

The figure for Norwich was 30, slightly less than last year, but it remains unacceptably high. Nationally, there was an increase of 15% from 2016 to 2017, while since 2010 rough sleeping estimates show an increase of 169%.

At St Martins, we are working hard to provide a place for rough sleepers in Norwich – and thanks to the fundraising efforts of local people, we have built facilities to accommodate an additional seven rough sleepers at our hostel Bishopbridge House.

Why are there so many rough sleepers?

We know from experience that there is more to homelessness than housing – but to give a roof over person’s head is the starting point to enable them to rebuild their life.