Every year a dedicated team of volunteers take to the city’s streets during December to raise vital funds to support St Martins to provide services for homeless people in Norwich throughout the year. 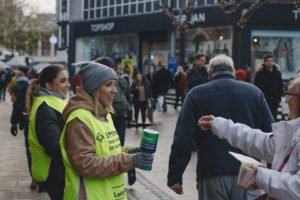 Chief Executive Dr Jan Sheldon said, “We are delighted to record the best ever Christmas street collection figures. The trustees and I extend our heartfelt thanks to the many volunteers who gave their time to help with our collection; and to the public for all their donations. This year we welcomed some new volunteers to our amazing team of established volunteers. We could not do the work we do without them, every penny collected makes a difference and helps people to turn their lives around.

The charity has been encouraged by this record amount and by the support and empathy demonstrated by donors, and also those who give regularly throughout the year. Nick Williams, a trustee of St Martins who co-ordinates the street collection along with his wife Gill said, “Several of our volunteers remarked that members of the public approached them to say that St Martins had helped them when they were homeless. It is so rewarding to meet people who have come through tough times thanks to the support of St Martins. The impact of the charity is huge.”

St Martins, along with other charities and agencies, are working hard to reduce the number of people sleeping rough in Norwich. The charity offers sustained and long-term support for homeless people, including those with poor mental health and people who have secure housing and need ongoing support. Money from this year’s collection will be spent on a new ‘Housing First’ accommodation project for homeless people that will provide at least 20 extra beds.

Dr Sheldon said, “There is an increased demand upon our services and while there is now more provision for assessment and emergency accommodation, we desperately need more bed space if we are to deliver on our vision of reducing the number of rough sleepers to single figures which we can count on one hand.”