The band formed out of our music group are releasing an album, in collaboration with a host of brilliant local artists, at an exciting event at Norwich Arts Centre on Thursday July 5. 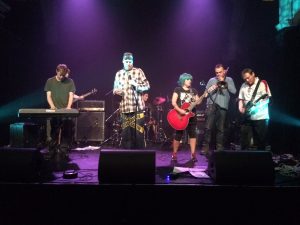 ‘The Undies’, so-called because they came together at Under 1 Roof, the training and education branch of St Martins, were formed three years ago at the weekly music sessions at the centre.

The centre offers support for vulnerable adults who are homeless or at risk of homelessness by offering opportunities to develop the skills that will help them to live independently in the community.

A mix of music tastes and ages has produced a great eclectic band, playing tunes from hip hop to rock. After playing various local shows and busking in the city, The Undies have produced their long awaited first release.

‘Stomach full of emptiness’ is a collaboration, under the tuition of Sue Tebble, from each member of the band talking about their very real experiences of homelessness. The track is part of a compilation of tracks donated by local bands to form the ‘Under 1 Riff’ album.

The ‘Under 1 Riff’ album will be launched at a gig at the Norwich Arts Centre on Thursday July 5. The Undies will perform on the night in addition to some of the bands who have contributed to the CD: Little Red Kings, Falling From Trees, Chris Pidgeon, Anto Morra, Skinnyboy Tunes and Matt Watson.

Tickets cost £6 in advance and £8 on the door and are available from Norwich Arts Centre. Click here to book

All proceeds from the album and ticket sales will go to support the work of Under 1 Roof.

The ‘Under 1 Riff’ CD will be available to purchase from the Under 1 Roof website and at the centre after the launch on July 5.