Aaron is a transgender male who lives in the community. He was abused throughout his childhood and as a result suffers with several mental health issues. He has struggled for years with substance misuse, including daily use of alcohol, cocaine and cannabis. Aaron had tried the “cold turkey” approach many times with no success. Aaron constantly presents with low mood and often talks of “not wanting to be here anymore”. He is often exploited financially by friends and family members and as a result of this and his drug use, rarely has enough money for food and regularly relies on food banks. Aaron struggles with change and trusting authorities and therefore is reluctant to work with anyone other than his main keyworker. 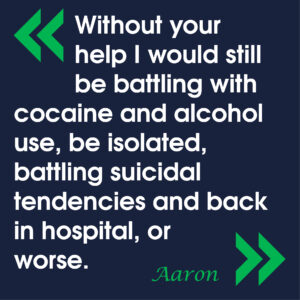 Since engaging with us (the Norfolk Integrated Housing and Community Support Service NIHCSS team of which St Martins is a partner), Aaron has made many positive changes to his life. We supported Aaron to Change Grow Live (CGL) in order to address the drug and alcohol use. He was reluctant to start with as he did not feel they would be able to help, but over the course of several months he has done extremely well. It has now been 14 weeks since he has had an alcoholic drink and used cocaine. He also regularly uses their café where he has made some new friends. He still uses cannabis though not as frequently. Aaron often said he felt the medication he was on was incorrect and not helping. We encouraged a medication review and the result of this has been positive. Aaron’s sleeping tablets were recently changed, he claims he now gets 10-12 hours of sleep a night whereas before he was getting 3-4 hours. This appears to have had a knock on effect with his mood, as he is a lot brighter ever since this change was made, and has admitted that he feels a lot less “low” than before. Aaron was happy for his main keyworker to appoint another worker to support him recently, and said he feels better about working with others.

The use of CGL was difficult for Aaron to begin with as he would bump into friends and dealers whilst there. He overcame that with support and engaged well, achieving his goals. Aaron also struggled with his place of residence, as neighbours were also drug users and dealers. He has now enlisted on the housing register and is hoping to be moved soon.

When Aaron was asked about his time with NIHCSS and how it has been effective within his journey he said,

‘NIHCSS support has been really helpful, it has been hard seeing different people (throughout covid-19) but a while ago I would have gone without the support rather than accept it from people I did not know so this is progress. I find the groups helpful for getting out of the house and I deal with things differently now (since support began) and NIHCSS can be helpful for pushing me to do things, which has meant I’m better at pushing myself to do things now too.’

‘Without the input from NIHCSS I would still be battling with cocaine and alcohol use, be isolated, battling suicidal tendencies and back in hospital or worse. I enjoy meeting staff for walks and helping set up the LGBQ+ group at Boudicca Court for other NIHCSS service users.’